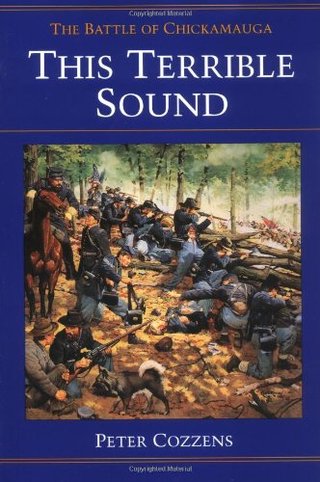 A Main Selection of the History Book Club. Chosen by Civil War Magazine as one of the 100 best books ever written on the Civil War.

"Cozzens expertly renders the furious ebb and flow of the two-day battle, capturing both the evolving strategies of each side and the horrendous experience of the fight... [This book] is built upon a bonanza of primary research, with the author having combed hundreds of diaries, letters, memoirs, interviews, official reports, and regimental histories. The individual voices and the rich experiences they represent are unforgettably presented here... Five hundred thirty-six pages of the two-day Battle of Chickamauga? Thanks to Mr. Cozzens's bracing, vivid prose style and marvelous eye for personal detail, this reader hankered for even more."

–David Haward Bain, New York Times Book Review
"Cozzens magnificently conveys the madness of it all. He sketches dozens of biographies and quotes from letters and memoirs to give an intimate sense of how men acted in those days: the pompous, the sentimental, the fatalistic; the stalwarts who died with a one-liner; the thieves and clowns and quiet heroes in the ranks."
–Michael Keman, Washington Post Book World
"This massive volume is likely to remain the definitive account of the battle for a generation or more... It cannot be too highly recommended for Civil War collections."
–Roland Green, ALA Booklist
"Battle history as it was meant to be written. Mr. Cozzens has produced not only the definitive narrative account of Chickamauga but also one of the season's pre-eminent Civil War books."
–Curt Johnson, Washington Times

Excerpt from Chapter Fifteen: If I Could Only Drown This Terrible Sound:


The end of the day’s fighting offered no respite from the suffering. When night at last drew a curtain on the killing, it offered up in its place new, more subtle terrors to torment the soldiers. With the setting of the sun, the temperature plummeted. A cold north wind whistled through the forest. Frost formed. The day had been warm, the sun unrelenting. Uniforms, soaked with sweat, offered no protection from the chill of the night. In frontline units, where opposing picket lines often were only a hundred yards apart, campfires were strictly prohibited...

Harder to take than the cold was the lack of water. Virtually no rain had fallen for over a month, and the many streams and rivulets that normally flowed down from Missionary Ridge to water the valley were bone dry. The Confederates had Chickamauga Creek from which to draw water, but within the Federal lines, the only source of water was a small cattle pond near the Widow Glenn house. So many wounded had crawled to it during the course of the fighting that the water was now fetid, its surface streaked with blood. Veterans aptly christened the pool “Bloody Pond”...

Of all the horrors endured that night, none made a more lasting impression on the soldiers than the wails of the wounded. “The roar of the battle’s bloody storm has ceased, and all is still save the waves that sob upon the shore—those waves are the shrieks of the wounded and dying—and these are more horrible and trying to our hearts than was the storm of battle. In this storm of groans and cries for help that come on the black night air, manly sympathy for comrades and enemy make our hearts bleed,” wrote Sergeant McGee of the Seventy-second Indiana. Fellow Hoosier Alva Griest of Company B was similarly moved. “The thunder of battle has ceased…but oh, a worse, more heart-rending sound breaks upon the night air. The groans from thousands of wounded in our front crying in anguish and pain, some for death to relieve them, others for water,” he scribbled in his journal. “Oh, if I could only drown this terrible sound, and yet I may also lie thus ere tomorrow’s sun crosses the heavens. Who can tell? Yet I must sleep in spite of it all.”