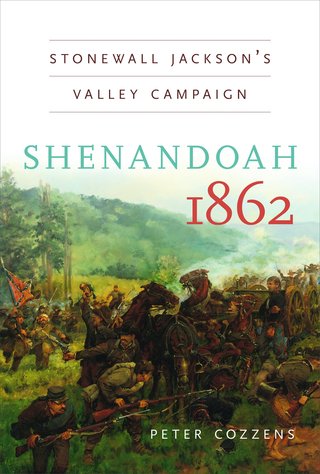 A Selection of the History Book Club and of the Military Book Club. A Choice Outstanding Academic Title.

"Cozzens is a master of Civil War military history."

–Publishers Weekly
"A magnificent, well-documented study of one of the most important campaigns of the Civil War."
–Washington Times
"The definitive history of the Valley Campaign."
–Army Magazine
"A compelling chronological and bilateral narrative of the entire campaign from March to June 1862. Using primary source materials from both sides, Cozzens offers new interpretations of the campaign and of Stonewall Jackson's legendary success, which was not nearly as brilliant as it appeared but was as much the result of Union failure as the triumph of Southern arms... Jackson's errors are covered here, as are those of a succession of Union commanders, all really learning their trade in these early stages of the war. Sure to become the standard work on the campaign, this book is strongly recommended."
–Library Journal
"A welcome, much-needed addition to Civil War campaign studies; valuable to scholars and enthusiasts alike. Highly recommended. "
–Choice

Excerpt from Chapter 3: They Ain’t Rigged Out Like Uncle Sam’s Men:


Once again, hypocrisy crept into Jackson’s comportment. His colonels must remain in their muddy camps, but that was no reason why Jackson himself should be miserable. After a few days in the crowded and noisy Taylor Hotel, Jackson accepted the offer of Lt. Col. Lewis T. Moore that he move into Moore’s unoccupied home at the northern end of Braddock Street. The elegant, two-story cottage made for an ideal headquarters and home. Jackson set up his office on the first floor and occupied a bedroom on the second. His staff slept across the hall. “Through the blessings of an ever-kind Heavenly Father, I am quite comfortable,” Jackson wrote his wife in mid-November. Perhaps she might come stay with him. “The Rev. Mr. [James R.] Graham, our Presbyterian minister, lives in the second house from here, his door being only about thirty yards from our gate. I have much work to perform and wouldn’t have much time to talk to my darling except at night; but then there is so much pleasant society among the ladies here that you could pass your time very agreeably. I hope to send for you just as soon as I can do so.” Anna needed no further encouragement. She set out for Winchester at once.

The principal culprit for the poor behavior of the Stonewall Brigade when it arrived at Winchester had been the acting commander, Lt. Col. James Preston of the 4th Virginia. Though well-meaning, Preston was too old and too bothered by rheumatism to exercise command effectively.

Jackson appealed to Richmond for a competent brigadier general to lead the brigade, which further alienated the regimental commanders, who felt that one of their number deserved the job. Jackson did not specify whom he wanted or what qualifications he sought for the post. Free to assign whom it pleased, the War Department sent him Richard B. Garnett, a proud but kindly scion of Tidewater aristocracy. Garnett was a West Point graduate who had done creditable service in the Seminole War and on the frontier, but somehow Jackson got it into his mind that Garnett’s appointment had been based solely on political considerations.

Garnett may or may not have been the best man available to lead the Stonewall Brigade. But had Jackson known of the contretemps his original request for reinforcements had occasioned among the high command, he might have shown more gratitude at having his old brigade back, regardless of who led it. Acting Secretary of War Benjamin had concluded early on that Jackson needed help. He had decided to send the Stonewall Brigade to Winchester even before Colonel Preston called on him, and had issued the necessary orders on November 5. The trouble was, he had neglected to inform either the adjutant general, Samuel Cooper, or the losing commander, General Johnston, of his decision. Not surprisingly, Johnston protested the transfer, first to Benjamin and then, when that failed, directly to President Davis. But Davis declined to intervene. Rumors had reached Richmond that the enemy was planning to move against Winchester. Jackson needed more troops, and the Stonewall Brigade, being composed of Valley men, was the logical unit to send.

In the same order that transferred the Stonewall Brigade to the Valley, Benjamin directed that six thousand men be detached from Brig. Gen. William W. Loring’s small Army of the Northwest, then operating in the Allegheny country, to join Jackson’s command by way of Staunton. Again, Benjamin neglected the chain of command. General Cooper assumed that Benjamin intended the troops for the army at Manassas as so informed General Johnston.

So men were on the way—enough to bring Jackson’s command to ten or eleven thousand when they arrived. That would still be far less than the forty thousand Federals that Jackson believed were threatening him from the north and west. What could Jackson do with his puny force in the face of such odds? He could attack.