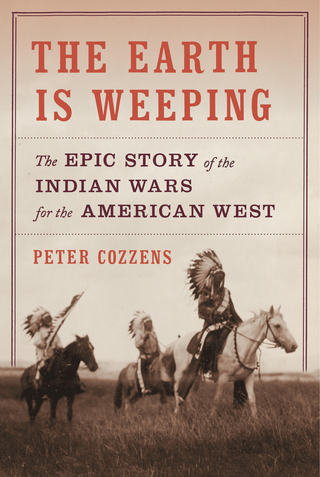 From the publisher (Knopf)


AN AMAZON BEST BOOK OF NOVEMBER 2016: Why write a book about the Indian Wars when we already have Dee Brown’s seminal 1970 account Bury My Heart at Wounded Knee? It turns out there’s a very good reason. While Dee Brown’s book greatly informed our modern view of the conflict between Native Americans and the United States government, it didn’t get everything right. Put very simply, the Indians weren’t all good and the white people weren’t all bad. In fact, especially with the Native Americans, it was much more complicated than that. As an example, inter-tribe rivalries led to strategic decisions—like siding with the U.S. government—that made sense given the landscape of power. This is a story of survival, one that unfolds under the shadow of a predetermined tragedy. If you’re at all interested in the Indian Wars, this scrupulous and even-handed account is essential reading.
-Chris Schluep, The Amazon Book Review

FROM THE GILDER LEHRMAN PRIZE COMMITTEE:

"The judges recognized The Earth Is Weeping as an instant classic of military history. His ambitiously broad sweep both geographically and chronologically, his diligent research, his masterful grasp of both strategy and tactics, but above all his beautiful written style made Peter Cozzens our unanimous winner." - Andrew Roberts, author of Napoleon: A Life and The Storm of War, among other books.

“[A]magnificent single-volume account of the post-Civil War conflicts that shaped our history and the mythology of the frontier… In examining the various Indian tribes and subgroupings within them, Cozzens does an admirable job of conveying their complexity and political divisions. This is a beautifully written work of understanding and compassion that will be a treasure for both general readers and specialists.”

Peter Cozzens’s The Earth is Weeping: The Epic Story of the Indian Wars for the American West is the most comprehensive, insightful synthesis of the conflict between the Western tribes and the United States government and citizens published by a popular New York press in decades. Like William Manchester’s The Glory and the Dream: A Narrative History of America, 1932-1972, the Maryland author’s brilliant thesis and detailed narrative will sustain the reader through three decades of the cataclysm and nearly 500 pages from the prologue to the conclusion. Cozzens’s interpretation expertly blends Old and New Western history theses, making it an extremely viable candidate for the Pulitzer and National Book award.

"Cozzens has stripped away the myths, but he is such a suprb writer that what remains is exquisite. Few writers possess the descriptive talent that the immensity of the west demands. Cozzens has that in spades. His beautiful prose brings to mind the novels of Larry McMurtry."
-Gerard DeGroot, The London Times
"No-one knows more about this period than Peter Cozzens. The miracle of The Earth is Weeping is that a mass of factual detail is presented so readably and, though one hesitates to put it this way, excitingly. There is a small atavistic thrill in coming across names as familiar as Sitting Bull and Crazy Horse early in their careers, but there is a deeper satisfaction in coming to understand better the astonishing patchwork of tribal politics and frictions that made up the pre-white west....The Earth is Weeping is a book that demands to be read."
- The Edinburgh Sunday Herald
"Cozzens does an exceptional job of examining the viewpoints of both sides, making heavy use of previously untapped primary sources… This is a timely and thorough book, presenting the story without hyperbole or histrionics of this controversial chapter in American history, providing an excellent one-volume history of America’s actual longest and most tragic war."
—Jerry Lenaburg, New York Journal of Books

"Peter Cozzens has taken on a massive chunk of Native American history and delivered it with power, style, and insight. He is above all a great storyteller. I have never read better, more concise, or more entertaining versions of the Little Bighorn story, Geronimo’s wild run to glory, the Ute War, or Captain Jack’s rebellion in the northwest."
–S. C. Gwynne, author of Empire of the Summer Moon
"In his exceptional book Cozzens in no way ignores injustices done to Indians, but he insists we not ignore the white perspective, either. In short, the author achieves what he set out to do—bringing historical balance to the story of the Indian wars."                      -Wild West Magazine
"In his account of the battle between whites and Native Americans, Cozzens details the tragic story of the American government’s relations with the Indian tribes during the massive expansion into the Great Plains after the Civil War. He weaves together the stories of leaders like Crazy Horse and Red Cloud – his depiction of Red Cloud is particularly vivid – with military antagonists like Custer and Grant. Cozzens adds nuance to our understanding of this period by highlighting the different factions among both the whites and the Indians, and of the ordinary people involved in this dark chapter in American history."
–National Book Review
"I’ve been waiting for an up-to-date, objective, and well-researched book on the Indian Wars, and Peter Cozzens’s The Earth is Weeping is all that and more--an elegantly written narrative of one of the great sagas in American History, and better than Bury My Heart at Wounded Knee."
–James Donovan, author of A Terrible Glory and The Blood of Heroes

"The uninterrupted succession of armed conflicts between the U. S. army and Indians on the Great Plains and Rocky Mountains from the 1860s to 1890, with fatalities mounting into the thousands, were truly America’s longest and most tragic war. In sobering detail, Peter Cozzens has chronicled this dark chapter in our history."
–James McPherson, author of Battle Cry of Freedom


"Peter Cozzens reminds us that tragedy, not melodrama, best characterizes the struggles for the American West. A moving narrative, substantial documentation, and even-handed analyses explain why The Earth is Weeping is the most lucid and reliable history of the Indian Wars in recent memory."
-Victor Davis Hanson, Hoover Institution, Stanford University

“A] valuable contribution… [S]weeps across 25 years of U.S. Indian policy, gives clear accounts of battles and raids and introduces generals and chiefs, foot soldiers and warriors. While Cozzens doesn’t say he wrote The Earth is Weeping to supplant [Bury My Heart at] Wounded Knee, he does express his hope that it will bring balance and better understanding of the Indian Wars of the American West. In that, he succeeds.”
—John B. Saul, Seattle Times

"[V]eteran historian Cozzens brings verve and a mastery of the era as the chronicles the personalities, politics and bloody clashes... [D]oes full justice to the complexities of this history."
—Matthew Price, Newsday

"A comprehensive look… A striking and thorough explanation… The structure of the book allows the interweaving of timelines and historical context in a way that makes the heavy subject matter extremely readable and also thought provoking. Cozzens…takes to heart his own words of warning about the myths that pervade pop culture… This is a history book, but it is also a present-tense book, full of ironies about how we’re not so different from 19th century Westerners."
—Erin H. Turner, Big Sky Journal

"[S]nappy prose, a strong narrative cadence, and admirable clarity. Cozzens is a gifted writer… It's one of the strengths of the book that Cozzens lets none of his cast of characters—Euro-Americans, Native Americans, political figures, military officers, and all the rest—off the hook for responsibility for what happened. Written briskly, it draws you in; its maps are unusually numerous and clear; its comprehensiveness, making it useful to anyone wishing to know the facts of the many, distinct Indian wars, is unlikely to be surpassed. For those wishing to learn the story of the Indian wars of the American West, this is the book to turn to."
—James M. Banner Jr., The Weekly Standard

"Cozzens does an exceptional job of examining the viewpoints of both sides, making heavy use of previously untapped primary sources… This is a timely and thorough book, presenting the story without hyperbole or histrionics of this controversial chapter in American history, providing an excellent one-volume history of America’s actual longest and most tragic war."
—Jerry Lenaburg, New York Journal of Books

"A comprehensive assessment of the wars for control of the American West. Highly recommended for the intertwined history of Native Americans and the post-Civil War frontier U.S. Army."
—Nathan Bender, Library Journal

"A valuable panoramic view… Treachery on such an epic scale can bear many retellings, and this account stands out for its impressive detail and scope."
—Priyanka Kumar, The Washington Post

"[S]cores of fascinating characters… [V]ivid descriptions of ordinary people on both sides... [A] sweeping, sharp and stylish history of the Indian Wars of the second half of the 19th century—and their tragic consequences for the native people. Cozzens retells familiar stories...with panache."
—Glenn C. Altschuler, Minneapolis Star Tribune

"In this comprehensive, well-researched and beautifully written book, Peter Cozzens weaves together the many particular histories of the Indian Wars to present a multifaceted view of the era."
—Foreign Service Journal

"In his exceptional book Cozzens in no way ignores injustices done to Indians, but he insists we not ignore the white perspective, either. In short, the author achieves what he set out to do—bringing historical balance to the story of the Indian wars."
- Gregory Lalire, editor, Wild West Magazine
"In The Earth Is Weeping, acclaimed author Peter Cozzens has produced the most comprehensive narrative of the clash of civilizations that dominated the American frontier in the last half of the 19th Century. [It] is narrative history at its best. By challenging conventional interpretations of history, Cozzens has added an exciting chapter in our understanding of the wresting of the American West from the Native American tribes."
- Army Magazine
"A breath of fresh air....This is a powerful book that is not only a welcome addition to the literature of the Americn West but also helps to redefine it."
- Kansas History